This reporter will guarantee this old saying is totally incorrect when applied to meeting the guys from the Flyin' Illini. Seeing these players lived up to every expectation of the fans who lined up hours waiting for their heroes at Ryno's Fine Sports Collectibles (214 S. Lake of the Woods Road in Mahomet, IL) on Saturday July 10th. One fan drove 6 hours to meet his Illini idols and there were fans from Michigan, Indiana, St. Louis and Chicago in attendance. 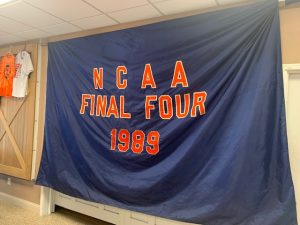 Ryan "Ryno" McClure, owner of Ryno's Fine Sport Collectibles, hosted this event. His shop regularly hosts signing events such as this. Since the Flyin' Illini hold a special place in his heart, hosting this event was a natural. With some help from the author (Patrick Quinn, who also is the co-host of the Illinois Players Show with Marcus Liberty), connections were made and getting Lowell Hamilton, Nick Anderson, Marcus Liberty, Kenny Battle, and Larry Smith to visit Ryno's became a reality.

Originally, Kendall Gill and Stephen Bardo were also scheduled to be at the event. Unfortunately for Flyin' Illini fans, Kendall had to attend an AAU basketball tourney involving his son and Stephen had to cancel at the last minute.

Fans even had the chance to see the Final Four Banner, which was on loan for this event. All in all, each member of the Flyin' Illini created some excellent memories for folks who came out for the first post-pandemic signing: 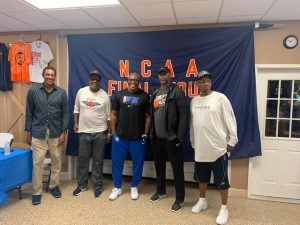 Lowell Hamilton: Humble and approachable. Very engaging. He was so nice to those attending. When fans brought up old programs or pictures, he looked thoroughly at the photos and articles. It was fantastic watching him take a trip down memory lane. Hamilton listened to fans and soaked it in. Hamilton lives in Georgia and drove up with his family for the event.

Nick Anderson: He shook hands and even greeted people at the door as many waited to get their Illini memorabilia signed. He shared lots of “inside stories” with fans as he signed autographs. He also revealed his Lou Henson and Jimmy Collins impressions. Anderson now works in the front office of the Orlando Magic. He lives in Florida.

Marcus Liberty: He's always engaging, he listens, and he’s the glue that keeps the guys connected to each other. Liberty took time to ask kids to show him their dribbling and passing skills. This is a guy who can still hit 85-90% of the jump shots he takes on a daily basis in Sarasota, Florida.

Kenny Battle: Outspoken and energetic, he traded verbal jabs with his teammates. This leads one to wonder what it was like to be a fly on the wall in the locker room or on the team bus back in the day when Battle got revved up. Battle also had his own Lou Henson and Jimmy Collins impressions. 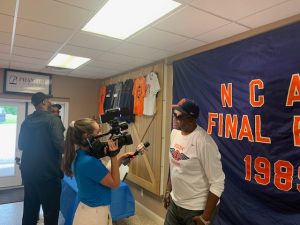 Larry Smith: The assist man made the drive up from his home in Alton, Illinois. He was so impressive, quiet and humble. He brought his son with him to show his family just how big of a following that the Flyin' Illini still have - even over 30 years after their legendary season.

To add some "star power" to the proceedings, WCIA’s Marlee Wierda covered the event. Liberty, Anderson and Battle were asked by Wierda about the hiring of Illinois Basketball Assistant Coach Tim Anderson.

All three were impressed with the new hire. Nick went on to say Tim could be “the next Jimmy Collins.” Liberty knows Tim Anderson well as he worked out with Liberty’s nephew at DePaul. Marlee's story is here: https://www.wcia.com/sports/tim-anderson-the-next-jimmy-collins/