Fly on the Wall - Epilogue 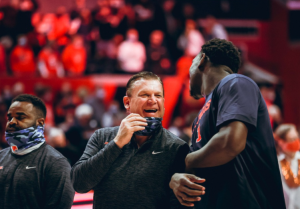 It was certainly an enlightening experience being embedded with the Illinois basketball team last weekend prior to their game against St. Francis to look at their scouting and game preparation. It’s really amazing the details that go into each and every decision and game plan. And it never stops.

Against St. Francis, the Illini had a game plan to run and push the tempo, but it turned out to be the slowest game of the season for them. Much of that came from the fact that each possession seemed to have at least 1 offensive rebound, for both teams. Transition points were 19-3 in favor of Illinois however, so they were close to their goal of 22 points in under 7 seconds.

But the Illini break it down in detail.

Shortly after the game the Illini coaches will receive their post game packet. They break down the details. Illinois scored 1.74 PPP and allowed 0.79 PPP. But they also break down paint touches, points per possession with a paint touch and points per possession without a paint touch. Scoring percentage on a good shot vs a bad shot. Against St. Francis, the Illini got a good shot 97% of the time, and scored 2.07 PPP.

They will break down each offensive series. A series is a type of set with the same starting action. The horns series is one example, transition is another, but they used 9 different series and 5 different sets within the horns series, for example. Each set is broken down based upon the success rate. The SLOBs and BLOBs are broken down as well, and although sometimes it may tell them that something works or doesn’t work, many times it tells them they need to get better at executing.

Defensively, we have mentioned the scouting report breakdowns, but there are also defensive rules where they have breakdowns. For example, Illinois doesn’t want to help from the ball side corner on a drive. They did that twice on Saturday. They also don’t want to foul a jump shooter. They did that twice on Saturday as well. Underwood said they are averaging 13 on the season, compared to 3 a year ago, and he estimated there were 7 or 8 on Saturday. A week of practice and a 2 day prep obviously helped.

The interesting part about the actual day before the game practice is that many of the scouting staff has moved on. They are finishing up the scout for the next game, which in this case is Missouri. They will tweak it after the last Missouri game Saturday afternoon, but it is mostly done prior to the St. Francis game. Zach Hamer said they usually work one game ahead, but many times the coaches will watch all 5 scouting games between the games. They, of course, need to stay focused on the game at hand.

Brad Underwood will also sit down and watch the game as well, looking for every little thing they can do better. But mostly Underwood has moved on. When he left the arena on Saturday he received his new folder. It contained all of the pertinent information about Missouri. Everything you could ever want to know about the Tigers offense and defense, and maybe even a little bit more.

-The preparation for individual players is also an interesting thing to follow. For example, Jacob Grandison has really taken over with a post-walkthrough routine. Grandison hits shots from every spot behind the 3 point line, and then hits mid range shots, FTs and layups. It’s very similar to what Ayo Dosunmu used to do. Alfonso Plummer is also a guy that is constantly getting shots up.

-The unsung heroes of every team are the managers. They are there before the players and clean up everything after the players leave. Many times getting their own pickup game going in their ‘free’ time. Chester Frazier is many times involved in that game. But their work goes largely unnoticed.

-In talking to the staff and observing the players, it’s clear that some players will go the extra mile, while others do the bare minimum. I talked to Underwood about 1 player and the question was, ‘Does he love it? Does he want to be great or is he content?’ That really sums it up.

*Each coach has a different role, but it’s a collective effort. With 7 people watching 5 games, that’s a lot of eyes on an opponent for the scouting report. The other interesting thing is the way they all interact. Alexander is quieter, and more supportive. Anderson is even quieter, and also supportive. Both are extremely detail oriented as well. Underwood is almost always the bad cop, but he also brings a certain levity at times as well, but there are moments when Coach Frazier takes that mantle.

*Underwood has a great relationship with his guys. Perhaps my favorite line of the whole weekend was when he joked with Luke Goode about being a 50% free throw shooter. Luke told him it was a small sample size (2-4), but Underwood kept digging, leaving it with ‘Love ya Luke’. Goode’s response, ‘Love you too coach. Most of the time.’