Four and a half months of competition come down to this:  the much-anticipated NCAA Tournament Selection Sunday show, when 68 teams find out where, when, and against whom they will play next...and where another dozen hopefuls find out they are not invited.

No two tournaments are alike and this year's field certainly will have its own personality. We project nine Big Ten teams in the field and the Illinois Fighting Illini taking the last spot on the 3-seed line in the tournament.  Many prognosticators have Illinois as a 4-seed, however the NCAA Tournament Selection Committee released its early top 16 seeds and had the Illini at the 12th overall slot or the last team on the 3-line.  That indicated that the committee will give Illinois some concession for playing without All-American Kofi Cockburn for five games due to an early season suspension and for going into concussion protocol in January as well as playing 2 1/2 months without preseason All-Big Ten guard Andre Curbelo.

Illinois is 4-2 since the early picks were announced with both losses coming to projected NCAA tournament teams.  Therefore we see no reason that Illinois should drop from that position.

--We project Baylor and Kansas out of the Big 12 will join Gonzaga and Arizona on the top line.  The conference foes have 17 and 20 wins, respectively, against Quad 1 opponents.

--Tennessee makes a very strong case for a #2 seed.  The SEC could see three teams on the 2-line if the committee decides to move Purdue or Villanova down.

--Michigan doesn't have a great resume, but this year's bubble is pretty soft. 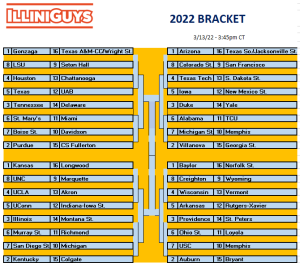