A total of eight Illini players from this past spring roster are no longer associated with Bret Bielema’s program and have entered the transfer portal.

A total of eight Illini players from this past spring roster are no longer associated with Bret Bielema’s program and have entered the transfer portal.

In what was expected roster attrition coinciding with Bret Bielema’s first season as head football coach at Illinois, eight reserve players have elected to continue their college football careers elsewhere. 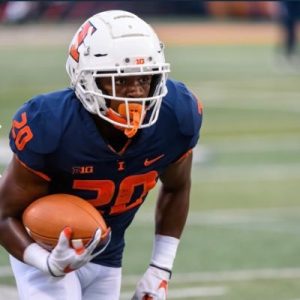 Tyler and Griffin elected to leave the Illini program days after spring practice concluded and the six others officially announced their decision Tuesday morning on social media. According to NCAA rules, Thursday (July 1) is the final day for a player to enter the transfer portal and still be immediately eligible for the upcoming 2021 season.

Of the announced roster attrition Tuesday morning, only three players (Cumby, Frenchie, and Riggins) participated in a game during their Illini playing careers. Cumby was attempting a transition from wide receiver to running back this past spring after playing in nine games over the past two seasons. Cumby, a 5-foot-8 athlete from Plano, Texas, had 109 total all-purpose yards in this two-year Illini career (47 receiving, 40 kick return, 11 rushing, 11 punt return) but was seen as lacking a position in Bielema’s ball-control offensive philosophy and his track speed wasn’t seen consistently productive on special teams.

Riggins, a three-star 2020 defensive tackle prospect from Saint Petersburg, Fla., had one tackle against Northwestern last season as a true freshman season where he saw action in just that one game. The 6-foot-3 and 280-pound product chose Lovie Smith’s Illini program over scholarship offers from several Power Five Conference program such as Florida, Miami (Fla.), Arizona State, Tennessee and Syracuse. 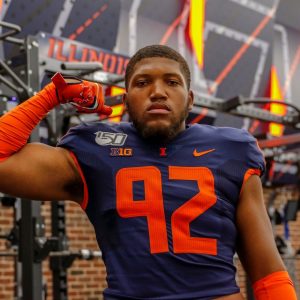 Shipton was a junior college transfer from Orange, Calif., who never saw action in the 2020 season, and was not seen as a scheme fit by the new coaching staff as Shipton’s undersized 280-pound frame wasn’t the right body type  to play the nose tackle in Bielema’s new 3-4 defensive style.

Frenchie was the highest-ranked prospect to sign with Illinois in the Class of 2020 as the St. Louis native picked the Illini over scholarship offers from Power Five Conference schools such as Iowa State, Kentucky, Louisville, Missouri, Tennessee, Nebraska, Purdue, South Carolina, and Syracuse. Frenchie was part of the quadrant of prospects (Frenchie, Isaiah Williams, Reggie Love and Shammond Cooper) coming to the Illini program from Trinity Catholic High School in St. Louis where current Illinois running backs coach Corey Patterson compiled a record of 27-6 in his three seasons as head coach.

None of the four offensive linemen saw action last year at Illinois and Illini offensive line coach Bart Miller was staring down the equation of having 20 scholarship players in his position room and already securing verbal commitments from three 2022 class prospects.

Jones was a transfer from Mississippi State and was seen prior to his verbal commitment to Lovie Smith’s program on April 30 as a potential stop-gap option beyond this upcoming 2021 season at either tackle position following the eligibility of Vederian Lowe and Alex Palczewski running out.
With the quadrant of offensive lineman leaving the Illini program, Illinois is now down to 16 scholarship players at that position and only 11 of them have multiple years of eligibility remaining.