Did Vegas Get the Over/Under Right with Illinois Football?

The Illini are entering year two under long-time Big Ten veteran head coach Bret Bielema and are looking to shock the nation with a so-called “surprise” season.

Vegas, apparently, doesn’t think so. The sports betting conglomerate has the Over/Under set at 4.5 wins, meaning that the Illini will remain in rebuild mode for at least another season. 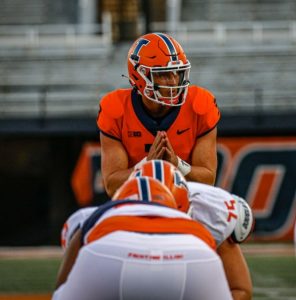 Although I do trust Vegas Insider’s analysis with how the odds are set, I don’t believe that a number will define Illinois’ season. In fact, it might be used as extra motivation for the team to perform at a higher-level.

Six wins will guarantee the Illini its first bowl berth since 2019, a feat that was reached after a 2-4 start before a four-game winning streak followed. This included a home upset against Wisconsin during Homecoming, a collapse from Michigan State that saw the Illini erase a 28-3 deficit, and a road victory against Purdue.

Three years removed from the team’s best year in over a decade, the focus now shifts to Bielema and his new quarterback, Tommy DeVito. If he can get into a rhythm, I have little doubt that this unit, if all goes according to plan, can win six or seven regular season games with a few Big Ten wins sprinkled in.

Taking care of business and starting 4-0 is paramount for the team’s overall success. It’s finding those two additional wins that will be critical as the season winds down. Look for the Dad’s Weekend game against Michigan State and Iowa games as ones to watch. Iowa has owned Illinois for nearly 20 years, and close calls last November saw the ball bounce Iowa’s way late in the game. If Illinois can fix those mistakes, they should be well on their way to the biggest home win in three years, maybe more.

So, yes, Vegas did get it right. However, with the pieces that Illinois has added, the over is the smart play here, in my opinion. And 6-6 is best case scenario.

The Illini are building a foundation for future success, and that success will intend to happen come late-August when they open against Wyoming.