Column: Bobby Bowden - One Of A Kind 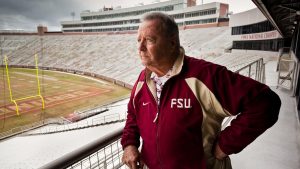 I've had the pleasure of meeting some amazing people in my career.  None more colorful nor more affable than Bobby Bowden.  There are those few among us whose personality is so large that it enters a room before the person does...and that was Bobby.

I first met Coach Bowden 29 years ago this month.  He was already a coaching icon, having constructed the Florida State program more than a decade earlier into a powerhouse and putting this former all-women's school permanently on the football map.  I was so young that I didn't even have to shave every day, just a year removed from college and barely out of my probation period as a sports anchor & reporter at a station in West Palm Beach.  I had never lived in Florida, had never even visited the state nor been to Tallahassee before this.

In short, I was in awe.  Two years earlier, I had covered Illinois football while at my first TV job at WICD in Champaign.  The Illini were completing their most exciting era in program history.  They'd gone 8-4, a win total they've reached only twice in the three decades since.

This was different.  Florida State was in the midst of renovating Doak Campbell Stadium, using the excuse of adding more classroom space to expand the field into a brick-encased cathedral.  It was Florida State's first season in the ACC after playing all 38 football seasons as an independent.  They entered camp that month with a swagger.  A young, soft-spoken Georgia kid named Charlie Ward was taking over at quarterback.  Ward had served as the team's punter as a true freshman and was getting his chance to lead an offense that boasted nine players that would later play in the NFL.

But make no mistake, it was Bowden who was the star of the show.  I interviewed Ward and future Pro Football Hall of Famer Derrick Brooks before it was Bowden's turn.  I heard him talking loudly around the corner to a staff assistant about a logistical issue; that Southern drawl bellowing down the hall.  He walked in tan and not as sweaty as I thought he should be after a morning practice in August.  He wore a muted gold polo shirt with burgundy coaches shorts with a matching ballcap and, of course, a whistle around his neck.  I had interviewed a few "legends" in my short career -- George McGovern and Martin Luther King III while in Champaign and Julius Erving and Greg Norman just a couple of months earlier, but this was pretty cool.  I composed myself as I rose for our handshake and introduction, but I was a bundle of excited nerves inside.  Bobby Bowden.  Here!  Shaking my hand!  As we began, he had the gruff that I believe is a prerequisite of any head football coach, but always with grace and class.  He tempered every upbeat sophomoric question of mine ('gee, isn't it great to be in the ACC now?!') with a grounded, if-we-can-only-get-a-first-down-against-them answer.  As polite and professional as he was, it wouldn't have surprised me if he'd gone back to the football offices and asked the sports information director 'is that dad-gummed kid even old enough to drink?   How old is he - 12??'

I returned to West Palm Beach and that fall watched the Seminoles go 11-1 and run through the ACC unbeaten.  In fact, they would begin ACC life on a 29-game win streak, never losing a conference game until Virginia would shock them in Charlottesville in season four. 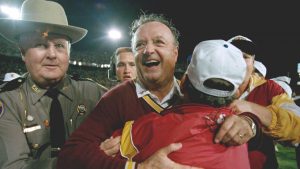 The next year, I returned to Tallahassee again.  Because football is so popular in the state and because we counted so many alumni of the big three schools in our area, we made an annual trip to FSU and to Gainesville and would shoot down the road to Miami to produce some preseason feature stories leading up to the season's kickoff.  With a year as a full-time sports journalist under my belt and a better understanding of the lay of the land, it was a more productive experience.  I was much more confident and more secure and it must have shown.  Bowden was very different as well; he knew what he had on his roster this time and wasn't as reluctant to talk about it.  It was a good exchange between two men now more familiar and more comfortable with each other.  As we finished and rose to shake hands, he smiled and winked at me and said, 'Ah think you've been watchin' some Seminole football, son!'  4 1/2 months later, my fiancee and I sat in the VIP booth at the old Orange Bowl and watched the Seminoles beat Nebraska for their first national championship.

My third and final meeting with Bobby Bowden was undoubtedly the best.  It was the famous Florida-Florida State game at Doak Campbell in November, 1994.  I was completing my first year with CNN Sports and this was my first road trip with the network.  That meant my first series of live shots and my first postgame report to be shown on Sports Tonight.  We would also interview the winning coach for our Sunday morning Coaches Corner show.  Being familiar and having now been chatty with both Bowden and Gators coach Steve Spurrier, I was looking forward to it.

The game was a classic.  The 4th ranked Gators had a commanding 31-3 lead over #7 Florida State after three quarters, but the Seminoles scored 28 unanswered points in the 4th to settle for a 31-31 tie. (There was no overtime in college football back then.)  We knew Spurrier would be in a sour mood and probably wouldn't be a good interview, so we requested to talk with Bowden.  The interview process after games is always a madhouse and the insane finish only intensified that.  We hustled to get our postgame work done and then set up for the one-on-one interview and waited.  When coach entered, the palpable excitement that continued to electrify the stadium followed.  My producer Tony Florkowski and photographer John McAfee joined me in shaking his hand.  We were journalists, but we were also sports fans and that was an unbelievable performance!  Coach Bowden sat down and, as John attached his microphone, he seemed to exhale for the first time.  He removed his cap and rubbed his eyes and head and said 'Larruh, that was most dad-gummed thing I've ever seen!  You know? I thought they had us.'  He paused.  'But we never gave up.  Never gave up.' His voice drifted as he gazed off in the distance.  Suddenly he perked up.  'Man, CNN!' he exclaimed as he reached over and slapped me on the knee.  'That's pretty cool!  Ah was watchin' TV with my wife one night and you came on and I told her, I said 'hey, I know that guy!  He used to come to our practices!'

We laughed and began the interview, which remains one of the favorites of my career.  There was one answer in particular that stood out to this day.  In the midst of our back-and-forth, I asked him why he didn't go for the win.  His blue eyes sparkled and he excitedly blurted out his response with that incredible Southern accent.  'Well, we come so far from bein' so far behind and I didn't wanna make one mistake, you know, and risk losin' the game after we'd come so...so I said 'go for the TIE...and let them undo the tie!'

From that point on, I surmised that talking to Bobby Bowden is like talking to your grandpa.  Everything just sounds great.  Earlier that day while flipping through the media guide during the game, I realized that he'd grown up in Birmingham.  My paternal grandfather was from Tuscaloosa and maybe that was the subconscious connection for me; the reason that drawl seemed to strike a chord within.  It was earthy and so familiar.

I never interviewed Bobby after that.  We bumped into each other at a function some years later.  'Hi Larruh!' he exclaimed as we did a blow-by handshake and wink as we each continued our respective paths to opposite sides of the room.

I have no doubt the Bowden family is being and will be inundated with similar stories as they mourn the passing of this patriarch.  Being much older and wiser than that kid who first stepped onto the campus in Tallahassee so many rains ago, I now reflect and ask myself just what made him special.  He was a man with faults, just like the rest of us.  I guess it seemed as though football didn't define him.  All those young student-athletes and future NFL players and wins and conference championships and two national titles...but I suspect he got just as much enjoyment sitting in his easy chair and reading a story to his grandkids.  I don't know.  It's just a guess.

Bobby Bowden's legacy was secure long before he walked away from football and certainly long before he left this Earth.  For many, it was his impact on the game.  For this journalist, it was being genuine.

Thank you for the opportunity to share my memories of him.  May he rest in peace.