CHAMPAIGN, IL – Brad Underwood came to Illinois in the winter of 2017 with one main vision: win championships. Now, just four years removed from his introductory press conference, Underwood has turned a once struggling Illini program into consistent winners, led by the core group of fifth-year seniors Trent Frazier and Da’Monte Williams. 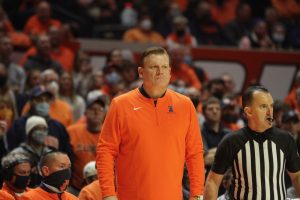 Both men will take the State Farm Center floor one final time, as No. 20 Illinois will welcome No. 24 Iowa into Champaign during the last day of the Big Ten regular season. Contingent on the Wisconsin-Nebraska outcome, Illinois would clinch a share of the conference title with a Cornhuskers upset win.

Underwood was highly complementary of Frazier. The Florida native was one of the few recruits that stayed during Underwood’s first two years of growing pains, including the worst conference record in recent memory.

“Trent took to heart that he was always going to be little and that he needed to be the hardest playing guy on the court. His pride, will to win is what I respect the most about him,” Underwood said during the pre-game press conference. “I'm very emotional, I wear my emotions on my sleeve. When you have players like Trent and Da'Monte...to see what they grow into is why I do this.”

Underwood also touched on Kofi Cockburn and his time with the basketball program. The junior center has already gained traction as a prospect in the 2022 NBA Draft. With all of this in mind, the fourth-year Illini coach plans to honor one of Big Ten’s best during the pre-game senior ceremony.

“It is information gathering time again for Kofi. I want him to have an opportunity to be celebrated, and that's why he's going through the ceremony tomorrow.”

The Illini played the Hawkeyes December 5, 2021 and won 87-83. A victory would cap off a season sweep and a potential share of the conference title.