2022 Four-star linebacker Jimmy Rolder from Chicago Marist High School has gone from no football offers at the start of the month to interest from nearly every Big Ten Conference program.

CHICAGO -- Jimmy Rolder is just as confused as everybody else at why power programs have all of a sudden considered his football recruitment a top priority. 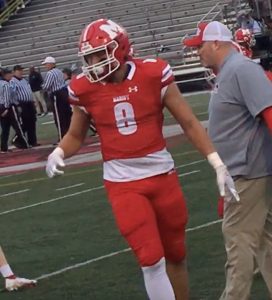 The 6-foot-2 and 230-pound linebacker wasn’t rated by any recruiting services at the beginning of his senior season at Marist High School after verbally committing to play baseball at Illinois in his junior year.

Before the calendar flipped to October, Rolder still had very little interest from Football Bowl Subdivision schools beyond an early offer from Ball State. This is when the Illinois coaching staff led by first-year head coach Bret Bielema decided to make Rolder an interesting proposition.

After witnessing his latest film and getting good reviews from defensive line coach Terrance Jamison, who is in charge of the Chicago area in the Illini’s recruiting footprint, Bielema decided to make an offer to Rolder that he says didn’t just involve football.

“When Illinois made the (football) offer to me, they made it clear that if I wanted to try it that they’d work with me on playing football in the fall and baseball in the spring,” Rolder said Friday night. “It’s something I’m considering for college and yes, if I go to Illinois, playing both sports is something I’d like to try.”

Rolder, whose father (Scott Kehoe) was a four-time lettermen and an All-Big Ten offensive lineman in 1986 for then-head coach Mike White, says he has grown up “loving everything about Illinois” and was immediately excited to accept the offer from Illini head baseball coach Dan Hartleb to play a corner infield position for a Big Ten Conference school. While maintaining publicly the college choice is his son’s decision to make, Kehoe has been very active on social media advocating for Rolder to consider his dad’s alma mater.

When COVID-19 delayed the ability for any Division 1 football staff to get on the road to evaluate and scout 2022 and 2023 prospects, Bielema began to understand Illinois might be able to make an appealing plea to Rolder and his family to intertwine both of the sports he loves.

“Jimmy loves baseball and he loves football so Illinois has been great to let him know that he will not only be allowed but actually encouraged to play both sports,” Kehoe told IlliniGuys.com “The Illinois coaches have all said they will work with him on his schedule to make it work. Some schools just want him to play football, but some have offered both. Illinois was the first to offer both.”

“Probably the last three or four guys that we’ve offered here at the University of Illinois in the high school ranks in the 2022 class, immediately after that have probably gotten anywhere from three to five additional Big Ten schools have offered, which is part of it,” Bielema said Monday. “I get it. I think it’s a sign of people paying attention to what we’re doing." 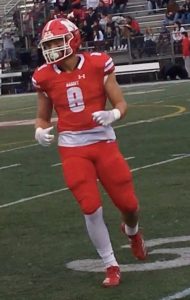 While the Hawkeyes are on its bye week, Iowa linebackers coach Seth Wallace was on the sidelines Friday night to watch Rolder’s Marist High School host Brother Rice in annual rivalry game commonly referred to as the Pulaski Road Super Bowl as both schools are separated by two miles on the same stretch of road. Brother Rice, led by three-star Illini 2022 tight end commit Henry Boyer, scored 40 unanswered points to leave with a 40-21 victory.

“I can only tell you what I think happened and what I believe is after Illinois offered me, a lot of other schools decided to do the same thing,” Rolder said. “I don’t understand it exactly and I wouldn’t say I know how this recruiting thing works because I don’t feel that much different as a player or a talent. All I know is I had been receiving interest from Illinois for a few weeks and then they offered and then I got offers nearly everyday after that.”

Rolder is currently being recruited by Jamison, a native of Riverdale who graduated from Thornton Township High School, and Illini inside linebackers coach Andy Buh. The trio of Bielema, Jamison and Buh are constantly finding ways to communicate to Rolder, who has become a high priority prospect in order to round out the Illini’s 2022 recruiting class with a player who would be one its highest-ranked commitments and/or signees.

Without mentioning Rolder’s name specifically because NCAA rules prohibit coaches from addressing athletes by name until they’ve either signed a National Letter-of-Intent or submitted enrollment papers to the university, Bielema has said he would be more than open to allowing players on football scholarship to play an active role in spring sports such as baseball or track and field if the opportunity presents itself.

“Dan (Hartleb) was one of the first people to come into the football offices, one of the first guys I struck up a relationship with. He and I have already talked about, I would bet you probably a half a dozen guys who are interested in football and baseball combinations. It’s easy to see the passion that Coach Hartleb and his staff has as well as the tradition,” Bielema said. “(The dual-sport athlete) will be a transition you really haven’t seen here before or haven’t seen as of late. That just wasn’t something that was permeated in the program we inherited.”

In a current world where the spring football season is considered almost as critical to the fall season and maybe even more so in terms of player development, Bielema maintains he is willing to share an elite athlete if that concession is the tipping point to the athlete signing with Illinois.

Bielema also knows arguably his most successful recruitment of a graduate transfer became reality because of a Power Five Conference program’s inability to work around a summer baseball schedule. While also being an All-Atlantic Coast Conference selection at quarterback, Russell Wilson was also a member of the nationally-ranked North Carolina State baseball team from 2008 to 2010. When Wilson was selected by the Colorado Rockies in the fourth round of the 2010 MLB Draft, the Wolfpack quarterback desired to play college football in the fall and spring while playing minor league baseball in the summer but then-N.C. State head coach Tom O’Brien stated he was prohibiting Wilson from being excused from summer workouts to pursue professional baseball.

“Russell and I have had very open conversations about his responsibilities respective to baseball and football,” O’Brien said in January 2011. “While I am certainly respectful of Russell's dedication to baseball these last several years, within those discussions I also communicated to him the importance of his time commitment to NC State football.”

Just four months after O'Brien's public comments, Wilson was granted a release from his football scholarship with one year of eligibility remaining and Bielema was waiting with open arms to welcome the quarterback to Wisconsin.

“The good Lord gave me two daughters so I don’t have to deal with this but too many times young men get focused on one sport and become very sports specific and they don’t play the games they love. What I’ve always said is if you give a young man a chance to play the game he loves in football but he also happens to love track, he happens to love baseball, sometimes a happy mind and a happy heart give you even better results,” Bielema said. “If they can help them win and be continuing members of a team and help them bring valuable skills to a roster, there’s no doubt I’d like to do it."

Bielema’s willingness to let athletes play football and baseball during their college careers at Illinois sets their recruitment of Rolder apart from the barrage of football offers from Power Five Conference blueblood programs such as Ohio State and Michigan presenting just a football offer.

“I know it’ll be difficult for me to do it and balance school,” said Rolder, who currently has a 5.4 grade-point average on a 5.0 scale at Marist High School. “I also think it would be really a lot of fun to try and it does mean something to me that Illinois wants to do everything they can to help me try.”

In fact, Bielema has already begun the process with Hartleb, who is entering his 17th season as head baseball coach at Illinois and 32nd season on the Illini coaching staff, to tag team the recruiting efforts of several dual-sport athletes interested and talented enough to be on the field at Illinois in both football and baseball. It’s an advantageous partnership as Bielema attempts to build successful recruiting efforts and Hartleb works around a current limit by the NCAA of 11.7 scholarships spread throughout a 35-player roster. When contacted by IlliniGuys.com, Hartleb immediately used the example of Mattoon native Kyle Hudson as the most recent and arguably the most successful football-baseball, dual-sport athlete at Illinois in the last 20 years. Hudson, who started at wide receiver for Illinois from 2005-2007 and earned 999 career yards on 73 receptions along with five touchdowns, still ranks second in Illinois baseball history in career batting average (.376) and on-base percentage (459), and ranks third in career steals (66). Hudson, 33, appeared in 14 games for the Baltimore Orioles in 2011 as part of an eight-year professional career. After coaching two seasons at Illinois under Hartleb, Hudson began his minor league coaching career and spent the 2020 season as an assistant coach with the Cleveland Indians as part of Terry Francona’s major league staff.

“How many athletes can say they started on a Rose Bowl team and were also an All American baseball player? We have had several two-sport athletes (football/baseball) during my tenure at Illinois,” Hartleb said. “There are a small percentage of athletes in the world that are talented enough to compete in two sports at the Power Five Conference level. Personally I embrace the opportunity to have that level of athlete involved in our baseball program. Coach Bielema embraces these athletes as well. We have worked together closely to foster recruiting relationships with two-sport athletes. We already have a plan in place to allow these athletes to compete in football in the fall and baseball in the spring. Why limit an athlete that is capable of competing at a high level? I am certainly looking forward to watching future baseball players compete on Saturdays in the fall at Memorial Stadium.”