Chester Frazier Returns to the Illini 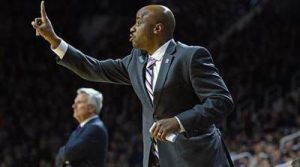 Courtesy of the Manhattan Mercury

"We are thrilled to welcome Chester Frazier back to the University of Illinois and add one of the brightest young stars in the profession to our staff," Underwood said. "Chester's love for his alma mater has stayed with him throughout his brilliant rise in the coaching ranks. This place means a great deal to him, having sweat equity in our program. Chester is a leader, a competitor, and a winner. He's achieved great success, as a player here and as a coach at both Kansas State and Virginia Tech. His work ethic on the court and on the recruiting trail, combined with the strong relationships he builds with players, make him a tremendous addition to the Fighting Illini."

Frazier has a wealth of experience despite only being 35 years old. In addition to being a three-year starter as a player at Illinois, Frazier has been at Virginia Tech for two years, finishing his tenure as the Associate Head Coach. Prior to that he spent seven years assisting his collegiate coach Bruce Weber at Kansas State. He was also a grad assistant at Illinois.

"I am thankful to Coach Young and the Virginia Tech players and staff for everything these last two years, and move on knowing that I've played a part in helping move that program forward," Frazier said. "Having said that, I am honored and excited to get back to the University of Illinois, which I consider home. I have blood, sweat, and tears invested there, met my wife there, and deep down still bleed Orange and Blue. I am motivated to get to work and help our program win a Big Ten championship. It escaped me as a player – I finished second twice – so that is going to be what drives me every day, bringing a trophy home to Champaign."

Frazier is respected in coaching circles and is known for the same traits as a coach as he was famous for having as a player. Frazier is a coach who is tenacious in his approach to coaching and recruiting. He is a competitor who gives everything he has to making positive contributions to his team.

There is still one open staff position at this time.