The Illinois men’s basketball program has confirmed a multi-game suspension for Illinois junior Kofi Cockburn to start the regular season.

CHAMPAIGN, Ill. -- Kofi Cockburn will be forced to sit out three games to start the 2021-22 season.

Sources close to the Illini program confirmed to IlliniGuys.com last week that Cockburn would be inactive in multiple games to start this upcoming season. The NCAA Eligibility Center informed Illinois head coach Brad Underwood that Cockburn will be ruled ineligible for multiple games after selling memorabilia on The Players Trunk website early this offseason. Illinois, which has opened the 2021-22 season at No. 11 in the preseason All-America poll, is scheduled to open the 2021-22 regular season with home games against Jackson State (Nov. 9) and Arkansas State (Nov. 12) before the Illini travel to Marquette on Nov. 15 for its first road contest of the season.

“We are disappointed with the three-game suspension, because there were unprecedented factors and altered timelines related to his decision to ultimately withdraw from the NBA Draft and return to school,” Illinois Head Coach Brad Underwood said. “Once Kofi had a full understanding of where he stood regarding the draft, he made an educated decision to return to school, work toward his degree, and continue improving his game. That said, we understand and respect the NCAA’s decision in this matter, and we will move forward accordingly. As always, Kofi’s attitude and outlook remain upbeat and positive. He is focused on helping his teammates prepare for the season, and we can’t wait to have him rejoin us on the court.” 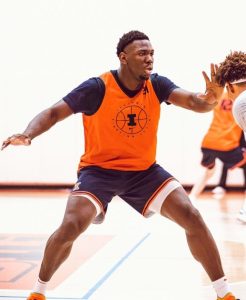 Cockburn was voted to the Associated Press preseason All-America team last Monday that followed a string of accolades for the national player of the year candidate, who is on the Kareem Adbul-Jabbar Center of the Year watch list and a preseason first-team All-America pick by CBS Sports, Blue Ribbon Yearbook, Athlon Sports and College Hoops Today. Cockburn, who averaged 17.7 points on 65.4 percent shooting and 9.5 rebounds last season, was named the preseason Big Ten Player of the Year choice by The Athletic, Blue Ribbon and Lindy's.

After selling the gear on The Players Trunk website, Cockburn announced his withdrawal from the NBA Draft on July 16 to return to campus for his third campaign. From the moment of Cockburn’s official announcement that he would return to Champaign, the Illinois athletics compliance staff submitted its petition to the NCAA Eligibility Center for Cockburn to return the financial proceeds of the merchandise sale to charity in order for him to be eligible to start the 2021-22 season.

Before announcing his return to Illinois, Cockburn chose to explore his options by surprisingly entering the transfer portal after removing his name from the NBA Draft.  He openly expressed an interest in joining a Kentucky program that now employs former Illini assistant coaches Orlando Antigua and Chin Coleman. However, the possibility never gained traction and the newly-hired Illini staff were able to convince Cockburn to return to the place where he led the program to a 24-7 overall record and 16-4 mark in conference play followed by the Big Ten Tournament title and a No. 1 seed in the NCAA tournament.