Illinois announced a new three-year contract extension for defensive coordinator Walters that calls for him to be a seven-figure assistant through the 2024 season.

CHAMPAIGN, Ill. -- The University of Illinois, athletics director Josh Whitman and head football coach Bret Bielema are doing everything it can to keep Ryan Walters leading the defense of its football program for years to come.

Illinois announced a new three-year contract extension for Walters before the end of his first season as the Illini’s defensive boss that calls for him to be a seven-figure coordinator through the 2024 season. 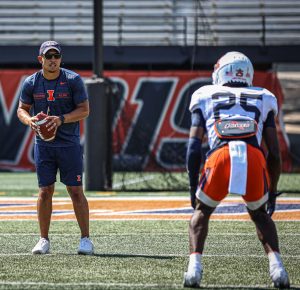 Walters, who originally left Missouri to join Bielema’s first staff at Illinois at then-annual salary of $850,000, signed a contract that will move his compensation to third-highest among assistant coaches in the Big Ten Conference and into the Top 10 nationally among defensive coordinators.

Walters' base salary increases to $1,050,000 for the 2022 season, with $100,000 raises in each of the two seasons that follow. He will also be eligible for annual retention incentives of at least $250,000 per season. Waters’ contract also includes a $1 million buyout for any non-head coaching position in the Big Ten, and a $750,000 buyout for any non-head coaching position outside of the Big Ten.

“First, on behalf of my family, I would like to thank the Champaign-Urbana community for the way you've embraced us with open arms," Walters said via a statement in a university news release. "I am excited to continue to build the Illinois defense under the leadership of Coach Bielema and with the exceptional staff he has put together here. The vision and passion of Bret and Josh Whitman is creating a championship culture that is exciting to be a part of. Myself, the staff, and the exceptional young men in our locker room will continue to work tirelessly to compete for and win championships here at Illinois."

An Illini Defense with Results that Exceed Expectations

Under his leadership, Walters’s defense at Illinois has made a 13.3 points per game improvement from last season, the second-best improvement in the nation, while allowing 77.4 fewer yards per game. The Illini rank 35th nationally in opposing points per game, 44th in takeaways, and 42nd in third-down defense. Illinois' scoring defense, total defense, and third-down defense have all improved more than 40 spots in the national rankings.

"It's hard to state the impact Ryan has had on the defensive side of the ball and our whole program," Bielema said via a statement in a university news release. "Our players feed off his energy and teaching, and he has a tremendous feel for the game when he's calling it. His leadership, combined with the proven minds in the defensive staff room, have allowed him to create the Illinois defense, not a scheme that has been done in the past. I'm grateful that our administration, led by Josh Whitman, was able to get in front of this and reward Ryan for the tremendous impact he's had and is going to have in the future here at Illinois." 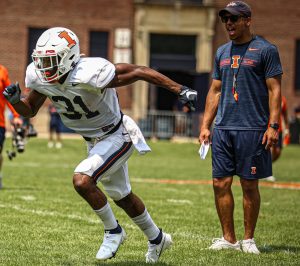 Walters’ defense has allowed 17.6 points per game in Big Ten games, the fourth-best in the Big Ten, and made a year-over-year improvement of 17.3 points per game in Big Ten play, the second-best conference-only improvement of any team in the nation. Illinois has held nine of their 10 opponents under their current season scoring average, including all seven Big Ten opponents. Earlier this season, Illinois held three consecutive opponents to 20 points or less for the first time since 2011, and is currently riding its second three-game streak of the same feat.

"In Ryan Walters, we have found one of the most dynamic, relatable defensive play callers in all of college football, and his impact on our program has been both quick and dramatic," Whitman said via a statement in a university news release. "He is an excellent teacher, tactician, and recruiter. It was important to us to move proactively to renew our commitment to Ryan and his family so that we can continue the forward momentum he has helped build. My thanks to Chancellor Jones and our university's administration for their understanding and support of these important steps to advance Illinois Athletics. We are grateful to Ryan, Tara, and their sons for their commitment to our Fighting Illini family."

Walters’ contract extension is expected to be approved by at the next university board of trustees meeting scheduled for Thursday, Nov. 18.

The defense's performance in conference road games has propelled the team's success away from Memorial Stadium. Illinois has allowed only 29 points (9.7) in regulation of its three Big Ten road games this season, including only three TDs. In Big Ten road games, the run defense has allowed only 2.1 yards per carry (90 carries, 189 yards), including only 0.7 yards per carry in the fourth quarter of those games (19 carries, 14 yards).

Walters, 35, was retained as the defensive boss of the Missouri program after Eli Drinkwitz was hired to replace Barry Odom as head coach after the 2019 season. The native of Los Angeles, Calif., had been part of Mizzou's staff since 2015, was promoted to defensive coordinator at the end of the 2017 season.

Walters came to Missouri from Memphis in Feb. 2015 and was a key factor in Mizzou’s 2015 defense that finished in the Top 10 nationally in total defense, scoring defense and pass defense. As the cornerbacks coach at Memphis, Walters oversaw a defense that was among the most improved in the nation. Memphis finished with a 10-3 record in 2014, thanks in large part to its defense that ranked fifth nationally in points allowed (17.1 avg.) and 22nd in total defense (343.3 avg.) in the regular season.

Walters played collegiately at Colorado. He began his coaching career as a student assistant at Colorado working with the secondary in 2009, and then spent two years on staff at Arizona, where he was a graduate assistant in 2010, before being promoted to defensive backs coach for the 2011 season by then-Wildcats head coach Mike Stoops.

Walters then moved to Oklahoma as a graduate assistant cornerbacks coach in 2012, as the Sooners went 10-3 and played in the 2013 Cotton Bowl. He moved to North Texas for the 2013 season, where he coached cornerbacks and helped lead them to a 9-4 record in its first year in Conference USA and a win in the 2013 Heart of Dallas Bowl. The Mean Green defense ranked fourth nationally in 2013 in turnovers gained (34), eighth in points allowed (17.8 ppg), 13th in interceptions (18) and 17th in total defense (348.3 ypg).

As a player, Walters had a standout career as a safety at Colorado from 2004-08. He started 33 times in 46 contests for the Buffaloes, and earned honorable mention All-Big 12 honors from the Associated Press and first-team All-Colorado honors from the state’s National Football Foundation his senior year.