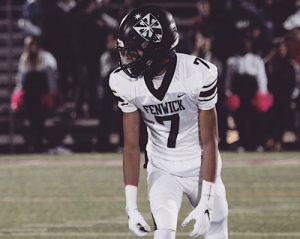 Eian Pugh, a three-star 2022 wide receiver from Fenwick High School in Oak Park, gave his verbal pledge to Bret Bielema’s Illini program Wednesday just days after renouncing his previous commitment to Cincinnati and just over two weeks from his arrival on the Champaign campus.

Pugh, who did not attend his scheduled official visit to Cincinnati this past weekend, renounced his verbal pledge to the Bearcats program on Monday and had an official visit to Iowa scheduled for this upcoming weekend but it’s our understanding at IlliniGuys that he will now not make that trip to Iowa City.

Pugh, a 6-foot-3 and 177-pound receiver, currently holds scholarship offers from Iowa, Indiana, Cincinnati, Ball State and Toledo. The senior-to-be at Fenwick had previously committed to Cincinnati this past Christmas Day but the hiring of Bielema and the intent of the Illini’s new coach to restart a relationship with in-state prospects instantly put Pugh on their wish list.

Pugh arrived in Champaign for an official visit on the June 4th weekend when the NCAA first allowed prospects to visit campuses in-person with coaches for the first time in several months. Pugh’s official visit to Illinois was on the same weekend as the nine previously committed prospects to the Illini’s 2022 class. Pugh, who totaled 53 receptions for 802 yards and eight touchdowns in five games at Fenwick in the shortened spring high school season, is the second wide receiver to commit to Illinois’ 2022 class joining three-star slot receiver Hank Beatty from Rochester.

Pugh’s commitment marks the 10th pledge to the Illini’s 2022 class, which is the second-most of the seven schools in the Western Division of the Big Ten Conference, and is the fifth in-state prospect to commit to Bret Bielema’s first full recruiting class at Illinois. The current verbal commitments of the Illini’s 2022 class have them currently ranked 41st overall and ninth in the Big Ten but behind only Minnesota and Nebraska in the Western Division. 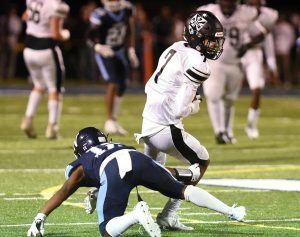 Pugh’s regional recruiter from the Illini coaching staff throughout this process was defensive line coach Terrance Jamison, who is a native of Riverdale, Ill., and graduated from Thornton Township High School before signing to play at Wisconsin for Bielema. Illinois also assigned wide receiver coach George McDonald to Pugh’s recruitment.

Illinois has 11 scholarship wide receivers on the 2021 roster but lose the production of leading target Josh Imatorbhebhe (22 receptions, 297 yards, three touchdowns) to graduation and are severely depleted for outside pass-catching options. Two of those 11 scholarships are athletes converting from another position (former quarterback Isaiah Williams and former cornerback Marquez Beason) and only three of those targets are physically built like the traditional outside X-receiver options with multiple years of eligibility left (Miami transfer Brian Hightower, Dalevon Campbell and incoming freshman Patrick Bryant). 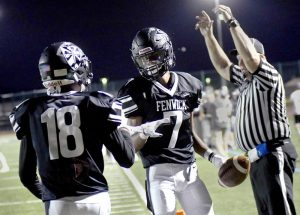 Quick Take: Pugh’s commitment represents a start to the rebuilding of an Illini position group that is in need of serious work. At 6-foot-3 and 177 pounds, Pugh is the perfect body type for what Illinois will need as an outside receiver who can attack the football at its highest point on deep throws. However, what might set Pugh apart from other tall targets with the necessary speed is his willingness to go over the middle for catches, get aggressive in blocking for outside cutback runs and his experience at gaining significant yards after the catch as the target of a bubble screen. Pugh was also used as a returner last season at Fenwick and may get an opportunity to do that for Illinois even before he gets a chance to fully succeed at receiver.

The flip of Pugh is just another example of Bielema’s commitment to keeping in-state prospects home and shows a complete reversal attitude toward Chicagoland prospects and high school coaches toward the Illini program as compared to the previous Lovie Smith regime. Expect Illinois to continue to address their depth and top-end talent issue inside the receiver room with this 2022 recruiting class.