Illinois’ Brandon Peters was one of several prominent college quarterbacks selected to be college counselors at the 2021 Manning Passing Academy camp in Louisiana. 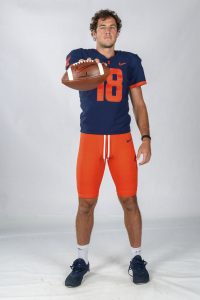 Brandon Peters finally got the opportunity to meet his childhood idol this past weekend after being selected to be a college quarterback counselor at the 25th annual Manning Passing Academy.

In every level of play (from high school, in the U.S. Army All-America Game, at the University of Michigan and now at Illinois, Peters has worn the No. 18 — to honor his idol, Peyton Manning. Peyton Manning, who switched his jersey number from No. 16 in college at Tennessee to No. 18 in the National Football League as a tribute to his father Archie, joined his father and two brothers (Cooper and Eli) in arguably the most prestigious and highly-attended overnight football camp in the country at Nicholls State University in Thibodaux, La.

Peters was one of 46 Division I college quarterbacks selected to participate by the Manning family and the MPA organizers to serve as camp counselors and throw in a Saturday Night Lights passing demonstration at the annual camp.

Unfortunately, weather that included heavy thunderstorms and lightning throughout Saturday forced a cancellation of most of the on-field activities but campers were still able to watch film and get detailed instruction inside the field room with the Manning quartet along with the college counselors.

Peters and his father Dave, who is in the mortgage business in Avon, Indiana, have had Indianapolis Colts season tickets for several years and saw Peyton Manning play home games to start his professional career inside the RCA Dome.

“I wouldn’t say I ever modeled my game around him but he was somebody that I considered a role model and looked up to, definitely,” Peters said of Manning.

The MPA is a family-owned and managed football camp that “embraces the basic fundamentals of football while catering to the offensive skill positions” and so running backs, wide receivers and tight ends are encouraged to sign up along with the next generation of quarterback talent all across the country for the four-night camp experience.

Peters will enter fall camp at Illinois as the projected starter under center in Bret Bielema’s new offense and under the direction of offensive coordinator Tony Petersen will have to learn the sixth new scheme since beginning his college football career in 2016. Peters missed three games last season after testing positive for COVID-19 Started five games at quarterback and struggled to complete just 39 of 80 passes for 429 yards and three touchdowns in 2020. He was clearly and overwhelmingly the stronger of any of the six quarterbacks during Illinois’ spring practice drills and went 12 of 18 for 291 yards and a touchdown in just a half of play in the Orange and Blue Spring Game on April 19.

“Brandon is a guy that since we got here, has been a blessing for us. He’s a guy that has gotten more and more confidence with each and every practice,” Bielema said about Peters following the spring game.

The MPA experience completes what has been a busy spring and summer for Peters, who will begin this season on the Johnny Unitas Golden Arm Award watch list and a Maxwell Award watch list candidate, as he worked in May for the second straight offseason with private quarterback coach Donovon Dooley and NFL Hall of Fame recipient Kurt Warner in Arizona.

“The biggest thing with Kurt is he’s all about footwork and having your back foot planted when you throw,” Peters said. “So, that’s one of the biggest things for me is making sure my back foot is planted and I’m in rhythm when I throw.”

“Kurt has stressed the idea with Brandon of ‘condensing the throw’ and essentially making sure everything he delivers is a perfectly catchable ball,” Dooley said. “There was a moment where Kurt told Brandon ‘I never ever threw a ball as hard as he could in the NFL’ and I could see Brandon give him that look like he was understanding that you don’t need to throw bullets most of the time.”