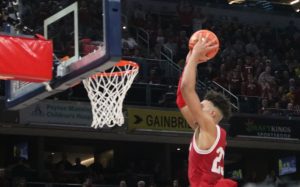 INDIANAPOLIS, Ind. - Trayce Jackson-Davis scored a game-high 24 points as Indiana rallied from a 17-point second half deficit to beat Michigan 74-69 in its Big Ten tournament opener.

Michigan (17-14, 11-9) was in control for most of the game and took a 60-43 lead on Eli Brooks' layup with 12:53 to play in the second half.  But the Wolverines' shooting went ice cold as they missed 13 consecutive shots from the field and committed seven turnovers over the next eleven minutes.  That allowed Indiana to go on a 28-4 run and take a 71-64 lead, much to the delight of the pro-Hoosiers crowd.

In all, Michigan - which came in as the #8 seed - missed 16 of their final 18 shots as they lose their tournament opener for the first time since 2006.

Meanwhile, Jackson-Davis was spectacular.  Held in check for the first half, the junior forward scored 15 of his points in the game's final ten minutes to spur the Hoosiers' run to victory.

Indiana needed this win to improve their NCAA tournament resume as they make a late scramble to earn an at-large bid on Sunday.  And they'll need to solve the Illini on Friday to further enhance their case.  Illinois has won four straight over their rivals, including a 74-57 victory over the Hoosiers in Bloomington last month.

Meanwhile, the Illini have sights set on winning their first ever back-to-back Big Ten tournament championships.  They've won five of their last six overall, including a dramatic 74-72 defeat of Iowa Sunday night that gave them a share of their first conference regular season title since 2005.

Stay with IlliniGuys.com for complete coverage from Indianapolis throughout the Big Ten tournament.