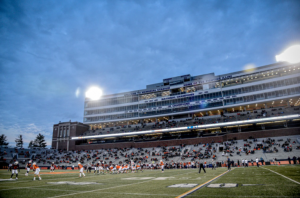 Fans at Memorial Stadium for the 1st time since Fall 2019

Owen Carney and his teammates had to wait a long time before taking the Memorial Stadium field to the chorus of cheering fans decked out in orange and blue.

On Monday night, marking the team’s first showing of the Bret Bielema era, the Illini at last got to put on a show for their supporters. Spread throughout the 60,000-seat stadium, the crowd was sparse, but the team didn’t mind.

“I’d just like to thank the whole Illini Nation just for coming out, supporting us and getting us to the full capacity we were allowed,” Carney said. “It was a rush running out of the tunnel. It’s a feeling I definitely missed. It’s been some time. It was great having them out there. Like no other.”

In his return to the college football setting after several years in the NFL, Bielema was greeted warmly by his new fan base after having only previously coached at Memorial Stadium with Wisconsin.

“Just the overall feel, to think you’re at a college football game again,” Bielema said. “Even though the numbers were very limited, I think the crowd out there was great. You also saw our players react to it, I think there was a buzz. I know they were talking about it in the locker room.”

The Illini’s first-stringers (Orange) didn’t disappoint the crowd, either, blasting the reserves (Blue), 65-15.

For Bielema, who wanted to see his team play clean, organized football and come out injury-free, the night was mostly a success. Sure, freshman defensive lineman Sedarius McConnell did limp off the field after getting banged up in the second half. Khmari Thompson coughed up a Deuce Spann completion in the fourth quarter, ruining a rare good play by Blue.

But the product on the field was solid, just as Bielema was looking for.

“Take care of the football, make good decisions, have good ball security,” Bielema said. “I really wanted to see how we caught it in these windy conditions with the ball and also a little brisk temperature out there. I thought those things were accomplished. We played relatively penalty-free, really, on both sides. Had a couple of DPIs defensively. I wanted to see how we tackle, especially in open space, and we had some opportunities to do that.” 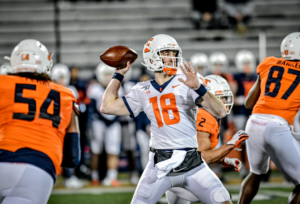 Returning quarterback Brandon Peters did plenty to reiterate why he has been the starter for the last two seasons, completing 12 of 18 passes for 291 yards and a touchdown.

Pihlstrom started over Verdis Brown and Jordyn Slaughter, both of whom are still in competition for the starting spot at right guard. Pearl will likely be replaced in the lineup by Alex Palczewski in the fall, though he is currently rehabbing from a season-ending injury.

All three running backs on Orange, Chase Brown, Reggie Love and East Carolina transfer Chase Hayden, tore it up behind the offensive line, which opened up massive gaps.

Brown rushed for 80 yards and two touchdowns on 10 carries, including a 26-yard long.

Love went for 63 yards and a touchdown on nine carries, and Hayden, who read the field well and looked every bit like a Big Ten back, broke loose for a 27-yard touchdown after making a defender miss. 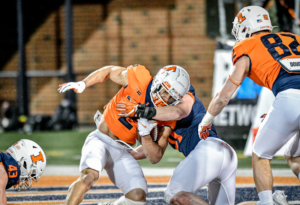 “Chase Brown has got a lot of physical talent and played a lot last year,” Bielema said. “Chase Hayden has played a lot in the places he’s been. Reggie had the biggest jump, just playing football.”

He even praised Blue running back Jakari Norwood, too, though Orange defense stifled him, allowing just eight yards on seven carries.

“I’ll tell you, Jakari Norwood comes in, he’s a nice change-of-pace back. He didn’t get to show much tonight just because he couldn’t get much going behind that Blue offensive line, but I think when you see him he had a better group up front you’ll see some production as well.”

Isaiah Williams gained just 23 yards on seven carries, though he did rattle off one 17-yard burst.

Definitely a level or two behind Peters in the passing game, Williams looked shaky airing the ball out. He completed just 2 of 10 passes for 30 yards while on Blue before going 1 of 2 for 20 yards on Orange in the second half. On several of his throws, including a few slants up the middle, Williams overthrew his targets by a yard or two.

He took two sacks, though his receivers and offensive linemen were little help.

Bielema leveled praise on both gunslingers, politely declining to name a starter after the game. But his words were telling.

“We’re not really making any decisions, we’re not done with spring ball yet,” Bielema said. “But obviously Brandon has continued to be impressive. He’s been a pretty consistent guy. He had a little dip week two. One scrimmage where we didn’t take care of the ball the way he wanted, but I think he really took some coaching. I think him and (offensive coordinator) Tony (Petersen) have been able to communicate very, very well.” 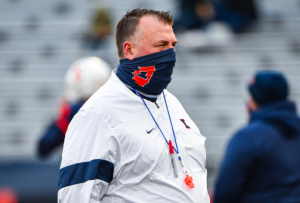 “Isaiah, I was very pleased with what he did when he came in, especially when he got behind that Orange line and and did what he did,” Bielema said. “So we’ll just continue to do what we’ve been doing, and after we get done with 15 practices, we’ll take a deep breath and see where we’re at.”

With Jamal Woods and Roderick Perry out with injuries, Bielema and defensive coordinator Ryan Walters looked to be running a 3-4 defense, while mixing in 4-2-5 action as well.

Both Isaiah Gay and Owen Carney were fantastic in their new positions as outside linebackers, embarrassing some younger linemen as they repeatedly breezed their way to Williams in the backfield.

Orange combined for 8.0 tackles for loss and 3.0 sacks, with Carney racking up 2.0 sacks, 2.5 TFLs and a quarterback hurry. He said the unit was communicating well and is coming together this spring, especially after returning much of last year’s core.

“Just how we communicate, how we’re on the same page,” Carney said. “On the flip side, how we are off the field, we’re almost always together. We’re a real close group, and we feel like we have great potential to do some special things this year.”

Keith Randolph was dominant, too, and Calvin Avery — who Bielema admitted afterward still needs to slim down and get into better shape — and Johnny Newton were busy on the night.

Avery might have a promising future as a nose guard in this defense. At times, he was able to really push the Blue line back. The staff turnover could benefit the Dallas native mightily, if he buys in all the way and commits fully to Tank Wright’s summer workout regimen.

Luke Ford had by far his best night in an Illini jersey. Too bad this one didn’t count, but the next one against Nebraska will, and I’d reckon Ford will be seeing several more targets in that game.

He racked up 88 yards and a touchdown on five receptions, while fellow tight end Daniel Barker also had a solid night, hauling in three catches for 29 yards, including a two-point conversion pass from the Big Ten Network sideline reporter — a Bielema invention to spice things up once Orange pulled away.

Bielema has been high on Ford, and the junior showed just why on Monday night. 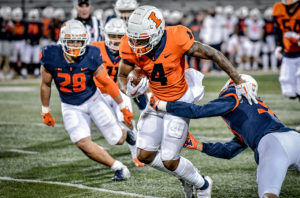 “I’ve really seen his maturity level just in everything that he’s doing take a big step forward,” Bielema said. “His demeanor, his work ethic, he’s still gonna have the big personality and do certain things, but I think he’s concentrating on what's important now. He’s taking care of his academic world and concentrating on being a good football player. And what that means is you show up every day and you do your diligent work, you put in the time and you get rewarded for it. So he’s really bought in.”

Schemes aren’t my strong suit as a football writer, but I’ll tell you what — you actually have to watch what the Illinois defense is doing now before the snap. Unlike with Lovie Smith’s defense, Walters does disguise some of his packages.

“It just puts some more stress on the opposing offensive coordinators we have to face,” Carney said of the new defense. “It’s definitely fun trying to see who’s coming and not going.”

As for Petersen’s offense, Brown described it as not being as high-paced, which helped him pick out gaps and remain patient with the ball.

Petersen called 31 running plays and 26 pass attempts for Orange, which finished with 621 yards of total offense.

“I get more time, I get to be patient and that’s a big part of it,” Brown said. “Last year I needed to become a more patient runner, but with that offense, the line was moving so fast, and they did a hell of a job, but they were moving so fast. Sometimes you’d have to hit that as fast as they were blocking it, so here it’s slower and allows us to take our time. We’re not rushing to the holes and things opening up. I love this offense.”

While Monday was just a soft opening, Bielema’s work continues to be cut out. To get the program ready for his first season, there’s a long way to go.

But his players are infused with belief, renewed by the chance to play in front of a crowd again and eager to prove to the rest of the Big Ten that Illinois is no pushover.

Take Carney’s word for it. The senior was soaking in the festivites Monday night, likely envisioning a packed stadium and intense, competitive conference matchups.

“I’m not going to speak too much on it,” Carney said, “but I have a good feeling about the coming season this fall.”