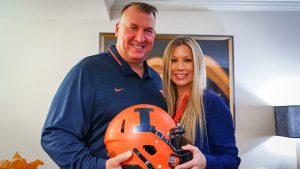 The hiring of Bret Bielema was another surprise to Illini fans. The rumor mill had Illini Athletic Director Josh Whitman landing on “his guy” Lance Liepold of Buffalo. Across the media and behind the scenes, the sources were in unison that Liepold would be announced Saturday. Saturday morning arrived only to provide a shock heard around the Illini Nation as former Badger and Razorback head coach Bret Bielema was returning to college football as the newest Fighting Illini head football coach. Since 2018, Bielema has been working with the Patriots and the Giants in the NFL.

If Whitman’s hiring decisions were based only upon unpredictability and secrecy, he would rate an A+ in both categories. Overall, Whitman has looked to have scored at least a B and maybe higher on his hiring of Brad Underwood. Conversely, the Lovie Smith hire, which was an inspired move, collapsed under the weight of Lovie not wanting to operate in the same manner as a collegiate head coach. Whitman’s grade on the Lovie hire has to be a D (only missing an F due to the upgrade in facilities done under Lovie's tenure). If Bielema doesn’t live up to expectations, Whitman may struggle to hold his job long enough to hire another football coach. If Bielema’s Illini tenure lives up to his Wisconsin tenure, Whitman will look like a genius after the Underwood/Bielema hiring successes.

Hail Mary #2 - The Case for Bielema

While Arkansas didn’t work out quite so well, the B1G West won’t feature such heavy hitters as the murderer’s row of former national champions - Auburn, LSU and Alabama that the Razorbacks had to contend with annually. There is little doubt that Iowa, Wisconsin and Northwestern represent three tough games, they just don’t compare to the typical Arkansas schedule. It is less of a hill to climb to return Illinois to relevance than it was to return Arkansas to relevance.

Signs are positive early on as Bielema has already reached out to Illinois high school football coaches, an action that Lovie chose not to do. Bielema seems to recognize that he has to have support from the state of Illinois’ high school football coaches to succeed as the Illini football coach. It would be nice to be competitive for the state’s top talent once again. But with competition like Ohio State, Notre Dame, Iowa, Wisconsin, and Michigan, those battles will still see the Illini as underdogs.

One thing is for certain with a Bret Bielema coached team, the defense will be tough and disciplined. That will be a welcome change. It will also take pressure off of the offense to be as high scoring as it’s had to be during the Lovie Smith era.

Hail Mary #3 - The Case against Bielema

Does Bielema think the power rushing offense of the Badgers will work at Illinois? We hope not. Illinois simply does not produce 330 monsters that will ultimately end up as NFL offensive linemen the way the state of Wisconsin seems to do.

For older Illini fans, we see one terrifying image that could manifest itself again. The image of Gary Moeller is forever burned into the memory of Illini fans. The man who was going to bring Michigan football to Champaign-Urbana. The man who was going to be the next great B1G coach. He produced a 6-24-3 record as the Fighting Illini head coach. Moeller discovered that the Michigan way of playing football requires 4 and 5-star players that would never commit to play for the late 70s era Illinois teams.

Moeller was a tremendous failure, but he set the table for the Mike White era of Illini success in the 80s. Bielema wants to be the Mike White of this story, not the next Gary Moeller. Now it’s up to Bielema. Will he learn from the errors of the past? What kind of Illini football team will we see next fall? Stay tuned.