CHAMPAIGN, IL – The countdown to college football season is officially underway, at least for the Illini. The team is set to undergo spring practices that began Monday in preparation for the Orange & Blue game April 21st. Illini coordinators Ryan Walters and Barry Lunney, Jr. spoke to the media about the process and what they are expecting over the next month.

Walters was complimentary of his newfound position groups, especially with the loss of Kerby Joseph to the NFL Draft. He feels that a bunch of freshman newcomers are primed to make a splash once August rolls around, specifically the ones who had redshirted the previous season.

The Illini defense ranked 25th in points per game last season and 53rd in takeaways per game with 1.4. The team strung together a few quality wins, including upsets against then-Big Ten title hopefuls in Penn State and Minnesota.

“Like I talked about Prince Green,” Walters said. “You know, from the linebacker room, you know, Kenenna [Odeluga] is another young guy that’s explosive. We’ll have a lot of new corners that didn’t get a lot of snaps a year ago that we’ll get a lot of key snaps this spring.”

Walters likes the install that he has but recognizes that it could use some fine-tuning in the weeks and months to come.

As for the offensive side of the ball, Barry Lunney Jr. takes over as the new offensive coordinator after coming from UTSA in 2021. The Roadrunners upset the Illini 37-30 at Memorial Stadium en route to an 11-1 season. 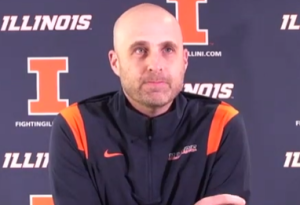 Lunney’s first order of business is the quarterback position, as Syracuse transfer Tommy DeVito and ex-Rutgers signal caller Arthur Sitkowski, will battle for the starting role. He had high praise for the former Orange quarterback, as he led Syracuse with 3,866 yards during his run.

“[DeVito] was one of the first guys I reached out to when I took the job,” Lunney said. “Mostly all of the quarterbacks and us talked, and he was certainly one we had a good initial conversation and it just kind of slowly and surely started chipping away at that relationship. And there’s nothing that expedites that relationship more than being on the field for practice.”

Practices continue Tuesday, Thursday, and Saturday mornings throughout the month of March and into April.