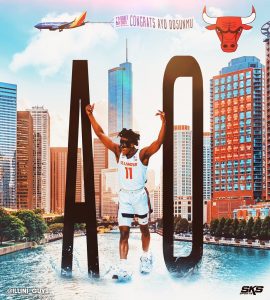 The lifelong dream of being drafted into the National Basketball Association by his home city franchise has come true for Ayo Dosunmu.

The former Illinois star guard was selected by the Chicago Bulls Thursday evening in the second round of the 2021 NBA Draft with the 38th overall pick.

Dosumu, who was born in Chicago and won a state high school championship at Morgan Park High School, ended his collegiate career at Illinois by earning consensus first team All-American honors after averaging 20.1 points, 6.3 rebounds and 5.3 assists per game while leading the Illini to a Big Ten tournament title and a No. 1 seed in the NCAA tournament.

The 6-foot-5 guard was named the USA Today National Player of the Year along with earning the Bob Cousy Point Guard of the Year award after being the only player in the NCAA over the last 11 seasons to average at least 20 points, six rebounds and five assists in a single season.

Led Illinois to its best season in 16 years, including Big Ten Tournament title, NCAA Tournament No. 1 seed, and No. 2 national ranking in final AP poll

"Last year I went through the draft process and I got so much feedback from almost every NBA team and I just wanted to turn what they said – the constructive criticism – and I worked at it. I improved on pretty much all my offensive and defensive stats," Dosunmu said on April 6 in an interview with ESPN’s ‘The Jump’ when he declared for the draft. "My body, I gained seven to eight pounds. Shout out to Coach Fletch; we put a lot of work into the weight room. My coaches; they helped me each and every day; long nights in the gym. And I just think I see the game better. I see the game much differently, being a junior, being 21 years old. And putting so much work into my film. That's what makes me believe I'm ready for the NBA."

Chicago has a lot of potential turnover at the guard and wing positions with star Zach LaVine’s contract ending in 2022 and both the Bulls point guards (Coby White and Tomas Satoransky) possibly becoming free agents after this upcoming season.

Dosunmu watched the draft telecast Thursday night from a private party inside a restaurant in Chicago with family, his Illini teammates and Illini coaches in attendance.

"Everything we've heard has been off the chart from the way he's conducted himself in interviews to his performance on the court, his testing," Illinois head coach Brad Underwood said earlier this month.

Underwood’s proclamation for his former All-American point guard did not end up being gospel as the Illinois guard fell into the second round of the 2021 NBA Draft.