Jerry West reflects on loss of Laker legends Kobe, Elgin the past 2 years 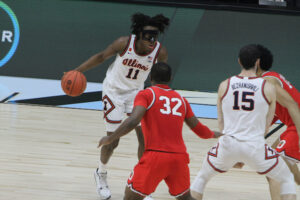 Ayo Dosunmu is well on his way to being the most decorated Illini basketball player ever, if he's not there already.  On Saturday, the junior from Chicago picked up yet another honor when he was named winner of the Bob Cousy Award as the nation's top point guard.

Dosunmu was the first player in college basketball since 2010 to average more than 20 points, 6 rebounds, and 5 assists a game.  His 5.3 assists per game averaged led the Big Ten, numbers and stats that flew in the face of national critics who said he wasn't a true point guard.

Dosumnu beat out some of the top players in the country for the honor; other finalists were Collin Gillespie of Villanova, Oklahoma State's Cade Cunningham, Baylor's Jared Butler, and Jalen Suggs of Gonzaga.

The All-Big Ten performer has been a unanimous first team All-American on every list and was named USA Today's Player of the Year for his clutch performance that earned him the reputation as the best closer in college basketball.  He is expected to enter the NBA Draft, where he is projected to be chosen in the mid-to-late first round this summer.

The Bob Cousy Award is named after the Basketball Hall of Famer who starred for Holy Cross before embarking on an NBA career in which he was a 13-time All-Star and 6-time champion with the Boston Celtics.  Dosunmu is the first Illini to win the Cousy Award since Dee Brown in 2006.