The Illini just added former Rutgers quarterback Artur Sitkowski to the QB depth chart. The 6'5", 224 pound quarterback was a former 4-star recruit from the class of 2018. Sitkowski will have three years of eligibility at the quarterback position for the Illini and will be immediately eligible to play. 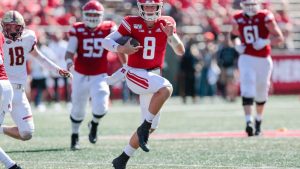 Sitkowski struggled as a freshman starter, throwing for 1158 yards with 4 touchdowns and leading the nation in interceptions with 18 in 2018.

In 2019, he chose to limit his play to 3 games to preserve a year of eligibility in order to redshirt after head coach Chris Ash was fired 4 games into the season. Sitkowski entered the transfer portal in November of 2019, only to withdraw from the portal when Greg Schiano was hired to be the Scarlet Knights head coach.

In 2020, transfer Noah Vedral beat out Sitkowski for the starting job. Sitkowski came off the bench to lead Rutgers to two of their three wins and threw for 444 yards, 3 touchdowns and no interceptions.

Ironically, back in 2019, had negotiations with Greg Schiano fallen through, Bret Bielema was the top fallback option to coach the Scarlet Knights. Sitkowski and Bielema may have missed out on being the starting QB and Head Coach combo at Rutgers, but they may be able to be turn that combination into reality at the University of Illinois.