CHAMPAIGN, Ill. -- Maybe the worst part of the crushing loss to Rutgers for Bret Bielema was walking to the podium and being forced to say arguably the most humbling words of his 315-day tenure as Illinois head football coach.

“When we got challenged to a fight, we didn’t respond the right way,” the first-year Illini leader said Saturday.

Following a disheartening 20-14 loss to a Rutgers team that came to Memorial Stadium winless in Big Ten Conference play, Bielema had to admit Saturday afternoon that his physical brand of football didn’t work due to the lack of execution and effort by his big people. 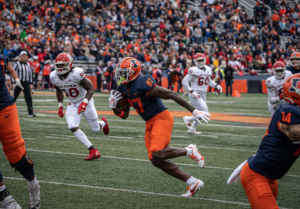 Just a week after piling up 357 rushing yards at then-No. 7 Penn State last week with jumbo packages and old-style offense, a Rutgers defense that had surrendered 31 points per game in Big Ten Conference play held Illinois to just 107 yards on the ground. Disregarding the 26-yard performance against Wisconsin earlier this season, the 107 rushing yards more replicated Bielema’s final season at Arkansas (2017) when the Razorbacks failed to crack the 150-yard mark in six games and each of his last three.

“The part that is probably the most frustrating today is just not being able to overcome those adverse moments,” Bielema said. “We kind of do well in those feel-good moments. We start off (the second half) with a penalty and that’s just frustrating.”

Illinois (3-6, 2-4 in Big Ten) walked out of the halftime locker room with a 14-10 lead but saw penalties in each of its first three drives eliminate any good vibes being built by what looked like momentum-building plays.

“It hurts having first-and-15 and first-and-25 because whenever you start a drive like that, you're always just in a get-back-on-track situation,” Illinois redshirt freshman wide receiver Isaiah Williams said. “Last week we showed we can do it. You can’t take the rat poison. When you have a little bit of success and you’re told how great you are, we got to use it as momentum. We didn’t do that today.”

On a seven-yard run out of the wildcat formation by Isaiah Williams, Illinois was flagged for a personal foul high-low block. Suddenly what should have been a second-and-three situation near midfield on the first drive of the second half was first-and-25 back where the Illini started the possession. A false start on Doug Kramer caused Illinois to post a three-and-out possession in its second and only third-quarter drive. Finally, while trying to answer a Rutgers go-ahead drive, Illinois right tackle Julian Pearl committed a personal foul hands to the face penalty that saw three plays total a negative-8 yards. On the very next drive, Illinois was backed inside its own 1-yard-line with little chance to build a game-changing drive.

Three penalties, all of which committed by offensive linemen that were physically dominated in the run game by a Rutgers defensive scheme that before Saturday had allowed 176 yards per game on the ground in league play.

“We only had three penalties today but they were three critical ones,” Bielema said. “Three successive drives and three penalties that killed them for us. These guys get tired of me saying it but penalties, turnovers and mental errors lose games and today was the definition of that.”

“We get everything in this program by what you earn, especially in this league,” Bielema said. “Without a doubt, consistency is a great word. It’s got to be essential for us to grow. When we have setbacks, sometimes it can be something that is self-inflicted. As a head coach and it being my call, I have to take responsibility that if any of those setbacks happen, we look at why they happened. We can’t just go say ‘oh, it happened.” What are we saying? What are we doing? What are we coaching? What are we seeing on film?”

Against a stacked box of defensive players near the line-of-scrimmage, Illinois’ offensive lineman couldn’t find ways to get their hands on the second and third-level players of Rutgers linebackers and defensive backs like they were able to do at Penn State. Just like the feeling following the exhilarating season-opening win over Nebraska in late August that showcased Bielema’s bully ball style, Illinois followed up by what their head coach called “laying an egg” in a second half that saw them gain 81 total yards.

“That’s the part that is frustrating because it seems like at times, they may take a step forward and get very excited about...on the same account, this is very, very frustrating to be in a position not to be able to capitalize,” Bielema said. “I knew they were going to load the box. But even when they do that, there were ways today to get outside on our runs and we’ve got to learn to take what the defense is allowing us to have.”