The Farrell Report - What to Expect from Bielema's Recruiting

I’ve been covering college football recruiting and college football in general for nearly 25 years. In that time, I’ve followed Illinois recruiting from Ron Turner to Ron Zook to Tim Beckman to Lovie Smith and now to Bret Bielema. Let’s just say a lot has changed. 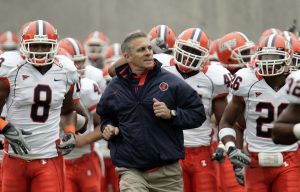 The Turner years weren’t overly exciting, but things took a turn when Ron Zook (and Mike Locksley) came on board. Illinois football recruiting was exciting, and they threw their hat in the ring for many big names especially locals and from Maryland and Florida. Zook has a smidge of success on the field (Rose Bowl) but overall went 34-51 with that nine-win 2007 season the pinnacle. He probably shouldn’t have been fired in 2011 despite the many ups and downs as he could recruit and there was still some excitement surrounding the program. But after a 6-0 start, 6 straight losses determined his fate - and the fate of the Illini program for the foreseeable future.

Tim Beckman was a horrible hire after a couple of solid years at Toledo. He was in way over his head. He was fired for abusing players and Illinois doubled down with another awful hire, an energy-less (or laid back, your choice) Lovie Smith who had no clue how to recruit high school players after 20 years in the NFL.

Since the Zook firing Illinois coaches have won 16 games in the Big Ten prior to the arrival of Bret Bielema. Bielema won four in his first season last year. Those same coaches have lost 49 conference games. That’s an average of less than two Big Ten wins per season. The Illini have had two winless Big Ten seasons since 2012. Ouch. 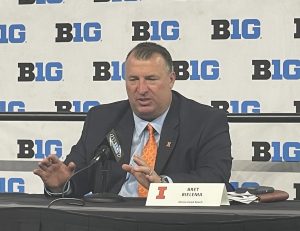 What does Bielema bring to the table from a coaching and recruiting perspective? Nothing overly exciting - but he’s consistent and knows what he wants. Obviously, he’s a power football coach and loves to develop offensive linemen who play other sports and have athleticism. He likes physical running backs and quarterbacks who don’t turn the ball over. On defense, it’s about scheme versatility, toughness and the ability to run to the ball. He’s old school. He knows what he wants and doesn’t care about recruiting rankings, he cares about fit and character. Sometimes that’s to his detriment but he is who he is.

Illinois fans who long for the days of recruiting relevance when Zook was involved with big names or even when Lovie landed a top target from the Midwest here and there need to look deeper into what Bielema wants. Most of the commitments will be three stars with an occasional four star and a few two stars sprinkled in. But a deeper look at these players is needed as Bielema is a developmental coach and many of his top players at Wisconsin and Arkansas weren’t household names.

I’ve never had the opportunity to focus specifically on Illinois recruiting to this level. As a national analyst, I deal with the recruiting “woes” of spoiled fans of Alabama, Georgia, Ohio State and so on. I look forward to covering Illinois recruiting. The Fighting Illini will be very interesting to me. I’ll break down the offensive commits and then the defensive over the next few days and then take a look at the portal.

It’s good to be on board with the IlliniGuys covering Illinois football.