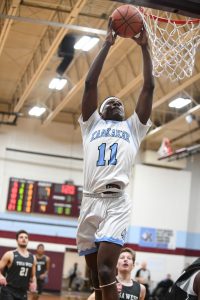 Storr is an athletic swing guard who can get to the rim with ease and who has a smooth shooting stroke.

Aj Storr @storr_aj has committed to the orange and blue. Future is BRIGHT for him!!! pic.twitter.com/A8p4cElZql

He opened eyes by knocking down jumpers from all over the court and attacking the rim with explosiveness during the recently concluded GEICO High School Basketball Nationals Tournament. Five of the top 10 and nine of the top 25 teams in the country competed in the tournament with many of the most sought-after prep recruits going against each other.

As Brad Sturdy and Brandon Wildman discussed in a recent episode of the “Sturdy for 30” podcast, Storr was about to step out of TyTy Washington’s shadow and emerge as a national prospect.

The Illinois staff didn’t waste any time in closing the deal on Storr – before other elite programs came knocking.

I had an opportunity to speak with this hard-working, talented, but humble young man earlier this week.

A:  The coaches, and especially Coach Coleman, were always honest with me about everything. They saw my talent early before other schools did, and I can appreciate that.

Q:  How many offers did you have?

A:  15, but I think my list was going to grow bigger this summer. I think the Illinois coaches saw that coming, too.

A:  That's still to be decided; there's a lot that may play a big role in my decision.

Q:  A source told me that you grew up an Illini fan, is there any truth to that?

A:  I sure did; that is definitely true. I get to play for my home state university. It can't get any better than that.

Q:  When you watched the Illini play, what did you like?

A:  I loved how they spaced the floor. They really got up and down the court. They had the tempo you need to be successful in college basketball, which is why they won games this year.

Q:  So tell us, what are the chances of you and TyTy playing together?

A:  We talked about it, for sure, it would be awesome to play with one of my favorite players and one of the best in the country.