It's no secret that Illinois has Cam Whitmore, who visited Villanova over the weekend, in their sights. Illinois has done a great job of marketing to Whitmore. With that in mind, if he didn't leave Villanova completely sold, Illinois is likely to be his next top choice. On the other hand, if things do fall in Villanova’s favor, the Illinois brand is currently perceived strongly by recruits across the nation, giving Illinois options to shoot for prime talent.

The Illinois staff is going all in on Ty Rodgers’ recruitment - that probably won't change - even if Whitmore were to say "yes" to the Illini. Furthermore, even if Illinois were to land Whitmore or Rodgers, they’ve recently shown a willingness to take 2 wings if they can secure the right players. Rodgers offers the unique ability to play the 3 or 4 positions for the Illini - and on both ends of the court depending on the matchups with any individual team. This offers versatility in who you can pair with him.  One could speculate that the staff would likely be willing to go after Otega Oweh even if they’ve already got Whitmore or Rodgers on board.

This leads me to a few recruits that are very talented, but are not yet far into the recruiting process, giving Illinois an opportunity to use their renewed national brand to generate excitement for the Illinois program with these players. If they haven't signed with anyone in the early signing period, teams like Illinois could choose to look at these players. They might almost be viewed as a "class within a class" as they've demonstrated their willingness to look at late suitors in their decision making process. 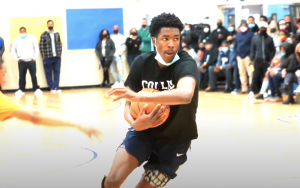 At 6’5”, Chance Westry is an interesting prospect. He’s a wing who also plays some minutes as a ball-handler and shot-creator for his teams. He is reminiscent of former Illinois player Ayo Dosunmu. His ability in transition is elite and he has shown the ability to facilitate an offense when needed. He also isn’t afraid of playing with other talented players. He’s played his last two high school seasons at Sierra Canyon and plays AAU for the New York Renaissance which has a likely 7 D1 players on their roster. There may also be a connection to Illinois through his AAU program, as it’s also the program Kofi Cockburn came through.

His recruitment intrigues me because for a long time LSU was supposedly his school of choice. Just recently, however, he cut them from his list – seemingly out of the blue. Current schools at the top of his recruitment include USC, Arizona State, Syracuse, and Auburn. Outside of that, other schools on his list include Nebraska, Washington, Maryland, UConn, and DePaul. 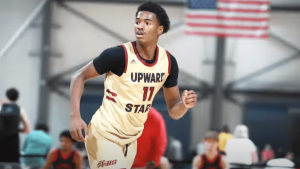 Julian Phillips is more of a long shot. The more I watch film of him, the more I think he will end up as a blue chip prospect, pushing for a top 5 ranking by the end of his senior season. His length was already a challenge for other players to match, but now that he’s expanded his ball-handling ability and added consistency to his jump shot, he has skyrocketed. He’s become a jack-of-all-trades type player who knows how to take advantage of his individual match ups – whether it be beating player with cuts off the ball, posting up smaller players, or taking slower defenders off the dribble. He will be able to play either the 3 or the 4 in college and will add significant value on both ends of the court.

Phillip’s recruitment has been quiet for a while and he's just now started taking his officials. His first was to USC, and he plans on taking officials to UCLA and Tennessee by the end of October. That still leaves 2 remaining for other suitors.

While it’s clear Illinois might need to make up a lot of ground to court him, his recruitment more and more seems like it will be a spring decision. This situation provides a school like Illinois the opportunity to capitalize during the season while they are highly ranked. 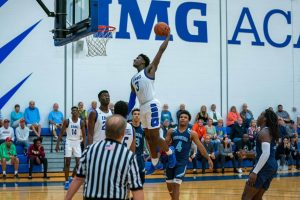 A teammate of another Illinois target (Ezra Ausar), Eric Dailey, Jr. plays for both the Georgia Stars and IMG academy. While Dailey is currently best suited as a power forward, he’s shown expansions in his perimeter game. Though his jumper is still a work in progress, he has the physical stature and athleticism to make up for it. Early on in the recruitment process, he was seen as a battle between Florida, Florida State, and Michigan.  In recent interviews, he mentioned Michigan and Georgia. He’s also entertained the idea of going to a pro league - and that would probably be the most likely path - but the addition of NIL deals could sway him to collegiate ball.

While some of these players are cutting their lists, and Illinois is not currently represented, the fluid nature of recruiting still leaves opportunity for Illinois to capitalize on their renewed brand to draw these players back into serious conversations. Multiple players in the last year have cut lists and then have entertained offers from bigger named schools as they roll in. Under Coach Brad Underwood, Illinois is now in a position to employ this type of strategy.