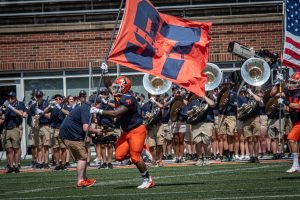 Backup quarterback Art Sitkowski threw two touchdowns and Calvin Hart Jr. returned a fumble for a score as Illinois beat Nebraska 30-22 to give head coach Bret Bielema a victory in his debut as the Illini coach.

The win came at a cost as 6th year senior quarterback Brandon Peters was knocked out of the game in the first quarter with an apparent shoulder injury and did not return.

Illinois opened the scoring on special teams when (Nebraska player) fielded a punt at his own 1-yard line, but backpedaled into the end zone and then attempted a forward pass.  That resulted in a safety and the first points of the game for either team.

Three plays later, Peters was injured when he was sacked on a 3rd down play.  He left the field and entered the medical tent and, after a few minutes, hopped on a cart and was escorted out of the stadium.  He watched the second half from the sidelines with his left arm in a sling.

In came Sitkowski, the former freshman starting quarterback at Rutgers who transferred to Illinois in the offseason.  After Nebraska scored a touchdown and field goal to take a 9-2 lead, Sitkowski engineered a scoring drive capped off by Mike Epstein's 1-yard touchdown run to tie the score.

Illinois then reeled off 21 unanswered points.  Keith Randolph Jr. sacked Huskers QB Adrian Martinez and forced a fumble and Calvin Hart Jr. picked it up and took it 41 yards for the score as the Illini took a 16-9 lead into halftime.

The momentum carried into the second half for Illinois (1-0) as they reeled off a 14-play drive that led to a Sitkowski to Luke Ford touchdown pass.  The drive lasted 8:04 and put Illinois firmly in control at 23-9.

Then, after the Illini defense forced a Nebraska punt, Sitkowski connected with fellow quarterback Deuce Spann - who lined up at receiver - on a beautiful 45-yard pass play to set up Isaiah Williams' 1-yard touchdown catch and a 30-9 lead.

But Nebraska wasn't done.  Martinez took the next snap 75 yards on a touchdown run to quickly close the gap to 30-16.

Then in the 4th quarter and needing two scores, the Huskers grinded out a 19-play drive that resulted in a Martinez touchdown pass.  But Connor Culp missed his second point-after attempt of the game, resulting in a 30-22 score that would be the final score.

Sitkowski settled in and was more than steady in his first appearance in an Illini uniform.  He completed 12 of 15 passes for 124 yards.  Mike Epstein was the top running back with 75 yards on 16 carries and Isaiah Williams, in his first start at wide receiver, caught six passes for 41 yards.